The Carp’s senses – How do they find their food?

Like humans, carp are dependent upon their senses when it comes to food. Carp can smell, taste and see the food that they plan to eat. They have a highly developed olfactory system that allows them to sense any dissolved substance in the water. The lining of their mouths contains chemically sensitive cells that allow it to determine whether food is good or bad. The carp can see by using both eyes. However, if an item is immediately in front of and below its mouth, the carp relies on its barbuls’ sense of touch and taste to detect items. 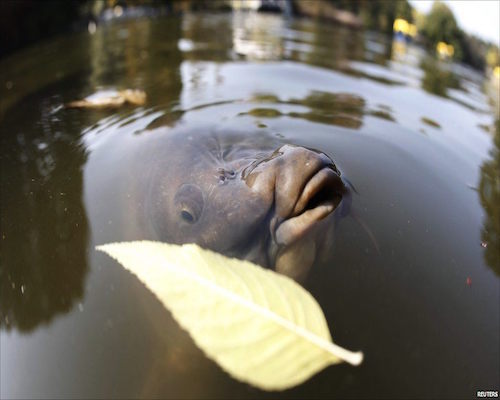 Carp can smell food items in the water. In an instant, their brain recognises the smell and determines if it is edible. Experiments have shown that carp are able to recognise the smell of amino acids and other smells emitted by bloodworms, crayfish, and aquatic plants. Green-lipped mussel extract, kelp extract, liver powder and molasses contain sucrose and amino acids, which the carp has evolved to recognise as having nutritional value. If the bait does not contain these molecules, the carp will not take it. Negative associations with the smell, such as certain foods are unsafe because they contained a hook in the past, also affect the fish’s willingness to eat. 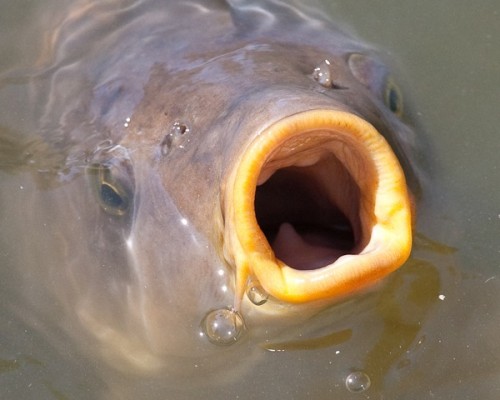 In addition to their keen sense of smell, carp have an excellent sense of taste. The lining of their mouths have chemically sensitive cells that help it determine if the food is good or bad. Carp also have taste buds on their barbules, pectoral and pelvic fins, underneath their head and along the length of their body. These allow it to more accurately pinpoint sources of food. When a carp smells bloodworm, for example, in a silt bed, it sucks the silt and other detritus into its mouth. The palatal taste organ on the top of the mouth traps the food against the bottom of the mouth. Non-food items are expelled through the gills. Larger items are spat out. Approximately 97% of what the carp takes in is ejected. What remains is crushed by the pharyngeal teeth at the back of the mouth. These are aligned in three rows on each side of the mouth, with three teeth in the innermost row and one tooth each in the two outer rows.

There are differences in opinion as to what carp find tasteful. Some have suggested that carp love boilies, bread crust, meat baits, fruity flavours, and stilton cheese. The best items are those that either emit favourable smells or contain ingredients which mimic them. Boilies containing natural attractors, such as green lipped mussel extract or kelp extract, and a good quality protein, such as fishmeal, will attract more fish than other baits. Some anglers use peanuts. While peanuts contain lipids, sugars and amino acids, these do not mimic the natural foods carp like. 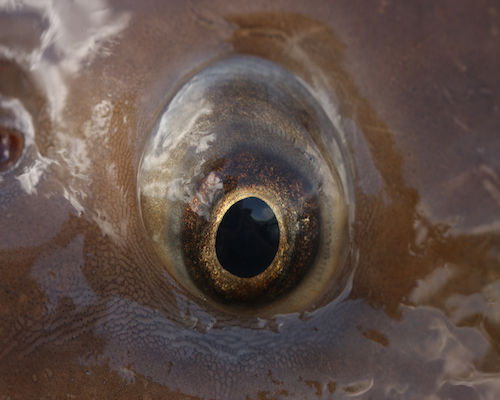 Aside from being able to smell and taste their prey, carp can see it. The carp’s eyes are more sensitive than ours. They can see in lower light levels and can also detect ultraviolet light. Carp use both eyes to focus and see accurately. They have a blind spot right in front of and below their mouths. At very close range, they depend on their barbuls’ sense of touch and taste to detect food. Carp eyes are very sensitive above the water to changes in light and movement.

Carp have highly effective ears which can detect frequencies from 60 to 6,000 Hz. They are located inside its body on either side of the head, just above the gills, at the rear of the brain. The ears feature a fluid filled sac with tiny hairs set on an ear bone (the otolith), which detect vibrations in the water. They are connected by a set of bones (the Weberian Apparatus) to the swim bladder, which acts as an amplifier. When the wind blows, it causes the angler’s line to vibrate. The carp are able to “hear” the vibrations and move towards the hook and bait.

Published with the permision of www.jytnbyt.co.za

To contact us please send us a
email using the email form below: